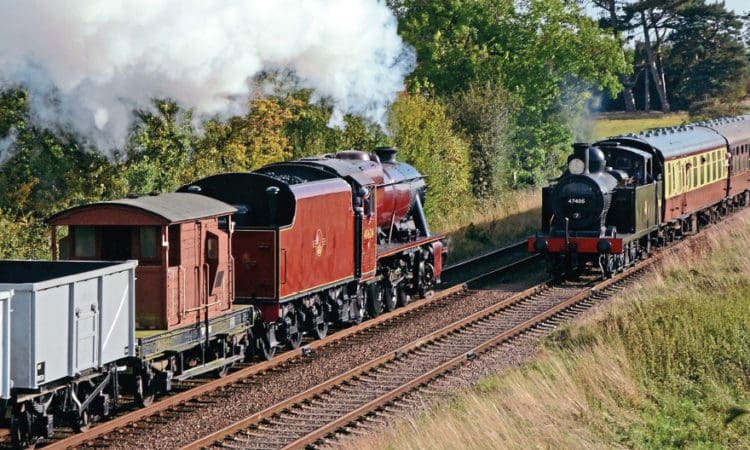 The East Midlands is a large and varied area, and its contribution to railway preservation is equally eclectic. The premier preserved steam railway is undoubtedly the Great Central Railway, with its length of double-track mainline.

The Midland Railway – Butterley is short but has an extensive collection of stock, much of it relating to the Midland Railway, while Peak Rail, running from Matlock, has long-term aims to reopen the scenic Midland Main Line route through the Peak District to Buxton.

A unique venue is Barrow Hill Roundhouse, the last working roundhouse-style locomotive shed in Britain, again with an extensive collection of stock, particularly diesel and electric.

The last operational locomotive roundhouse in Britain dates back to 1870 and was in use by BR for stabling diesel locomotives until February 1991. It was built by the Midland Railway to its standard design.

Chesterfield Borough Council became the new owners of the shed and yard in 1996.

The council granted a lease to the Barrow Hill Engine Shed Society, which secured and refurbished the site, having been very successful in obtaining funding from various sources. The site reopened to the public in July 1998.

It is now the home to many preserved locomotives – steam and diesel. It is open to the public on summer weekends, and stages a major gala weekend most years, with many visiting engines on a particular theme.

The Deltic Preservation Society has its base next to the roundhouse building, and the Harry Needle Railroad Company stores and maintains a number of operational diesel locomotives on-site for mainline contracts. The site retains its connection to the national network and can accommodate visiting railtours.

The Ashby & Nuneaton Joint Railway was the only major line built jointly by the MR and LNWR, opening in 1873, and not actually passing through Ashby-dela-Zouch.

Primarily built for coal traffic, passenger services ceased in 1931 and the Coalville to Shackerstone line closed completely in 1964, although the Ashby to Nuneaton line lasted until early-1970.

Shackerstone station became the headquarters of what was later known as the Market Bosworth Light Railway and now the Battlefield Line Railway, with trains running south via Market Bosworth to Shenton, the site of the famous Battle of Bosworth in 1485.

Steam trains started running on this line in the 1970s, but the line led a relatively low-key existence until recent years when mainline motive power became a much more regular feature, with some interesting visitors for gala events.

There are now few resident steam engines, all of industrial origin, but a sizeable fleet of diesels, many of which require considerable restoration.

Britain’s only preserved double-track heritage railway was once part of the Manchester Sheffield & Lincolnshire Railway’s London extension, the last mainline railway to be built in England, opening to Marylebone in 1899.

Edward Watkin, who became chairman of the MSLR in 1864, had higher ambitions for the line and intended to link it with continental Europe through a Channel Tunnel. The MSLR became the Great Central Railway in 1901.

In 1966, the line closed as a through route to London and most was lifted south of Rugby. A DMU service ran from Rugby to Nottingham Arkwright Street until 1969, when the line was finally closed.

The Main Line Steam Trust hoped to preserve the Leicester to Nottingham section in its entirety.

After a false start, the Great Central Railway (1976) Ltd was formed to raise funds through the sale of shares. Even then only the single track from Loughborough to Rothley was saved, but Charnwood Borough Council bought the land from Loughborough Central to Belgrave & Birstall…