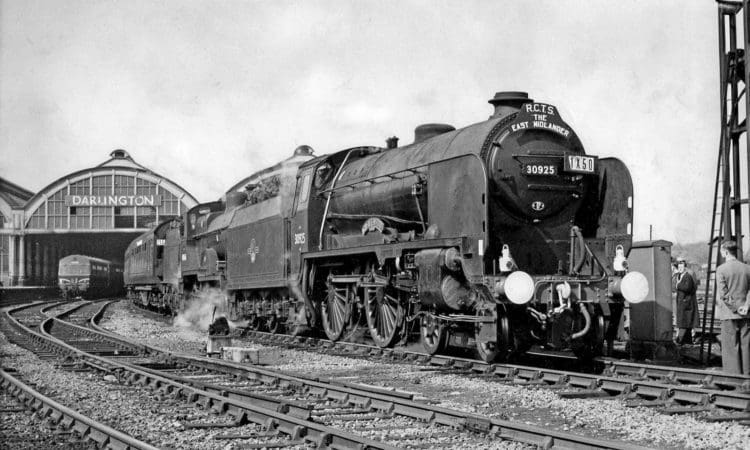 Explore the story of how Darlington cemented its place in the history books as the world’s most important railway town.

Jonathan Webb, author of new Mortons bookazine Darlington, looks ahead to the bicentenary of this historic rail town in 2025 and outlines four of the key turning points which helped put Darlington on the railway map.

Ask most people who the father of the railways was and most will probably give the name of George Stephenson.

However, it was the businesslike vision of Edward Pease that saw the Stockton & Darlington Railway come to fruition. Unlike most traditional railway towns, Darlington was already heavily industrialised by 1825, with the quality of its linen industry already being well-known. Its location on the Great North Road and renowned market also made it attractive to industrial investment.

The growth in the manufacture of wool and linen in the 1830s saw an explosion in the town’s population from the 7500 inhabitants of 1825.

These businesses were the foundations of the wealth generated by the Pease family and it was they, along with Quaker colleagues, who proved instrumental in bringing the railway to Darlington.

Stockton & Darlington Railway could instead have been a canal

The lead up to the opening of the S&DR was fraught with many difficulties, the first being whether the railway should be built at all.

When plans were submitted for a railway, many people protested against the plans. Two surveys were commissioned by the council, both of which declared that a canal would be a better option.

It wasn’t until letters were written by disgruntled locals to an engineer named George Overton that a campaign to build a railway was kick-started – a campaign that was backed by Edward Pease. Findings revealed that constructing a railway would be cheaper than a canal. Thus, the Stockton & Darlington Railway was born.

This day saw the opening of the Stockton & Darlington Railway, which had been planned for many years prior to this momentous occasion. Pease played a pivotal role in this, for it was he who had the foresight to conclude that the movement of coal from the Durham pits to the River Tees by endless and slow trains of packhorses was unsustainable.

On September 27, 1825, the first engine ran from Darlington to Stockton, preceded by a man on horseback carrying a flag bearing the Latin inscription ‘Periculum privatum utilitas publica’ (‘The private danger is the public good’). When the horseman was out of the way, the driver, George Stephenson, opened the throttle and pulled his train of wagons carrying 450 people at a speed of 15 miles per hour.

Very shortly after the opening of the Stockton & Darlington Railway, it soon became clear that the Stockton coaling staithes were incapable of dealing with large ships.

The four-mile extension opened to traffic in December 1830, with Timothy Hackworth’s steam locomotive The Globe hauling the first train. After that, Stockton & Darlington Railway became a major player in the UK’s railway industry and was seen as proof of the effectiveness of steam railways.

To celebrate the upcoming bicentenary of the Stockton & Darlington Railway, this 116-page bookazine tells the full story of this revolutionary railway town; from before its inception in 1825, right up to the big plans for the 200th anniversary in 2025.

Darlington is available to buy for just £6.99 at: https://classicmagazines.co.uk/product/5572/bookazine-darlington