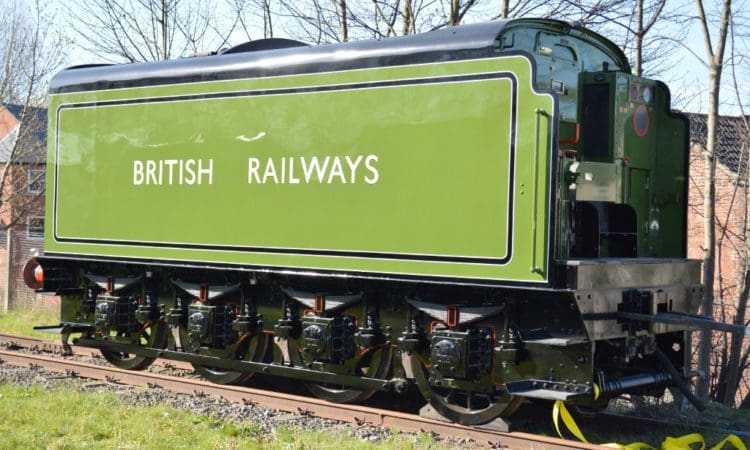 The team behind the project to build Britain’s most powerful express passenger steam locomotive has launched a new £450,000 appeal.

The money raised will fund the manufacture of the tender for new Gresley class ‘P2’ No. 2007 Prince of Wales.

The A1 Steam Locomotive Trust has set itself the challenge of raising £450,000 through The Tender Club from 250 supporters each donating £1,500 (plus Gift Aid) to the project in up to 15 payments of £100 by standing order.

The order to manufacture the tender tank has been placed with North View Engineering Solutions of Darlington. The tender frames are currently under construction at I D Howitt of Crofton, Wakefield.

The Gresley class ‘P2’ 2-8-2 ‘Mikados’ were the most powerful express passenger locomotives to operate in the UK. They were designed by Sir Nigel Gresley in the 1930s to haul 600-ton trains on the arduous Edinburgh to Aberdeen route. Sadly, the design was never fully developed, and they were rebuilt by Gresley’s successor Edward Thompson into ungainly class ‘A2’ 2 4-6-2 Pacifics in 1943/4, and scrapped by 1961.

The A1 Steam Locomotive Trust (A1SLT) – a registered charity and builders of famous new 100mph steam locomotive No. 60163 Tornado – is constructing the seventh member of this class at its Darlington Locomotive Works (DLW) over seven years, at an estimated cost of £5million, through its P2 Steam Locomotive Company subsidiary.

The project will demonstrate how the design can be fully realised through use of modern computer design techniques, enabling the new locomotive to deliver its full potential hauling passenger trains at high speed across today’s national network.

If the project is to remain on schedule to complete No. 2007 by 2021, the trust needs to take delivery of the tender frames and tank in autumn 2019.

Mark Allatt, ‘P2’ project director and trustee, The A1 Steam Locomotive Trust, commented: “We are delighted with the level of support that the project to has received since its launch. Thanks to our supporters’ continued generosity, over £3.2million has now been donated or pledged.

“I would encourage all steam enthusiasts who haven’t yet contributed to this exciting project to help us to meet these deadlines by becoming a member of The Tender Club or a monthly ‘P2 for the price of a pint of beer a week’ Covenantor.”

In return for supporting this appeal, special benefits for members of The Tender Club include:

* Opportunity to buy a ticket (seat already reserved) on one of the first trains hauled by No. 2007 Prince of Wales

* Opportunity to join one of the teams building No. 2007

* First choice of other components to sponsor

The tender for No. 2007 Prince of Wales is based closely on the tender built for ‘A1’ class No. 60163 Tornado. The original ‘P2’ tenders were to the 1930s non-corridor design built for the new ‘A3’ Pacifics being built at that time.

The water capacity of the original design was 5,000 gallons, which at a typical consumption of 45 gallons per mile would provide a range between water stops of 80 miles (with as safety margin).

The tender for Tornado was re-designed to increase the water capacity to 6,250 gallons, which increases the range to about 110 miles. The additional water capacity is at the expense of a reduction in coal capacity from 9 tons to 7½ tons.

The tender tank will be a fully welded structure made from weathering steel (as used on motorway bridges and the Angel of the North) to provide improved resistance to corrosion. The main visible differences with the new tender when compared to that of Tornado will be the curving inwards of the side sheets at the front to match the shape of the cab sides, and the extensive use of half-round beading along the front and top of the sides and the top of the back of the tank.

* Significant progress on design and manufacture of pipework