The name Barry is synonymous with railway preservation. It was the home of the world’s most famous railway scrapyard, where owner Dai Woodham, unique amongst his counterparts elsewhere, made the momentous decision not to scrap many of the main line steam locomotives he had bought, because recycling redundant wagons brought more immediate profits. As a result, a total of 213 BR locomotives were saved for heritage purposes.

This large-format volume indeed covers Woodham Brothers’ scrapyard, but it goes further to heighten the town’s immense heritage as a working railway centre. 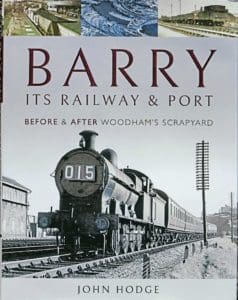 The terminus of later GWR constituent the Barry Railway, it was the place where the great coal-exporting docks were built in the 1880s, before which there were only around 100 inhabitants in the locality.

The volume looks at the continual expansion of the docks right until the demise of coal traffic in the 1970s, and also the emergence of Barry Island as a rail-served day trip and holiday destination from the early 20th century onwards. The engine shed and works are also covered extensively.

All the pictures are in black and white, and there are many superb views of the pre-Grouping, GWR and BR engines that ran through Barry, as well as the later WR diesel hydraulics, often on excursion traffic.

A final chapter looks at the town and docks today from the railway point of view, with Pacers aplenty on local passenger services and the variety of freight traffic that is still in evidence.