A pair of 150-year-old tickets, one from a railway that operated independently for just seven years, will be the centrepiece of Paddington Ticket Auction’s sale in central London on April 21.

The older of the two was issued by the Hampstead Junction Railway in the early 1860s for a second class single from Kensal Green to Acton. This railway was opened in January 1860 connecting the North London Railway at Camden with the North & South Western Junction Railway at Old Oak Junction. From the beginning it was worked by the NLR, and was absorbed by the LNWR in 1867. 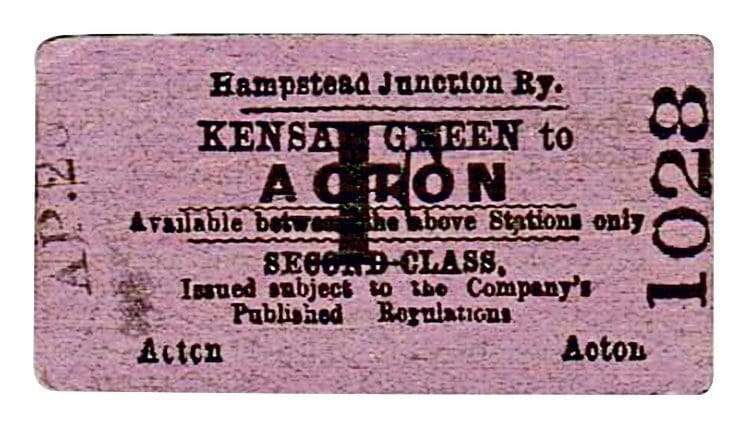 The second was issued by the Anglesey Central Railway for a single journey from Amlwch to Cemaes costing 9d (4p). This railway opened in stages between 1864 and 1867, was another to become part of the LNWR – in 1876 – and closed to passengers in 1964. Although undated, Paddington Ticket Auctions’ Chris Dickerson estimates its issue date as the late 1860s.

There’s also a 1920 Lynton & Barnstaple Railway 1st class single from Lynton to Woody Bay (named Wooda Bay until 1901), a Maryport & Carlisle Railway third class ticket from the same year for a “pitwoman” allowing travel on only a workers’ train to a colliery platform at Oughterside, and a selection of tickets dated 1921.

Chris said: “This will be one of our best ever selections of pre-Grouping tickets in terms of quality, age, value and variety, while the Hampstead Junction Railway example will be one of the oldest we have put under the hammer.” The auction, at The Royal National Hotel in Woburn Place, starts at 11am.

Read more News and Features in Issue 240 of HR – on sale now!