Nameplates from two GWR 4-6-0s that ended their days within six months of each other at London’s Old Oak Common shed (81A) will headline GW Railwayana’s sale at Pershore on March 17. They are Ketley Hall from No. 4935 and Usk Castle from No. 5032.

The Hall was built in June 1929 and withdrawn in March 1963, and carried the name of an 18th century Grade II-listed Shropshire country house that was home in its early days to the Reynolds family, which was associated with the development of the local canal network.

No. 5032, whose cabside numberplate will also be in the sale, emerged from Swindon in May 1934 and was taken out of service in September 1962, while another name that will feature is LNER B17 4-6-0 No. 61646 Gilwell Park, whose Darlington 1935 worksplate will be going under Simon Turner’s hammer. 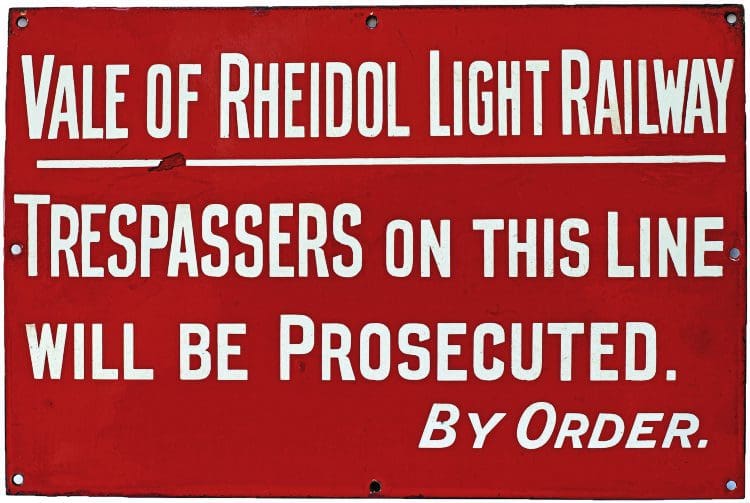 Smokebox numberplates from a pair of 9F 2-10-s, Nos. 92111 and 92142, will also feature in the sale. The former was built at Crewe in November 1956 and withdrawn from Birkenhead (8H) in October 1967, but if that operational life of fewer than 11 years is bad enough, how about that for No. 92142? This fine machine was built, also at Crewe, in July 1957 and withdrawn from New England (34E) in February 1965, meaning its BR service lasted for a mere 7½ years. What a financial waste some of the Standard locomotive build programme was.

Also on offer will be an enamel seatback from Hayling Island, the terminus of the 4½-mile branch from Havant that was opened to passengers by the LBSCR in July 1867 and became synonymous with the venerable and much-loved Class A1X ‘Terrier’ 0-6-0Ts. It closed in November 1963.

Another enamel is a Vale of Rheidol Light Railway trespass sign that pre-dates 1900. This was – and still is – the 1ft 11½in gauge line from Aberystwyth to Devil’s Bridge whose three GWR 2-6-2T engines – Nos. 7 Owain Glyndwr, 8 Llywelyn, and 9 Prince of Wales – were the first listed in the ABC Combined Volume for many years and were a source of fascination for we trainspotters for whom the Cardigan Bay coast of Wales may as well have been on another continent.

Among the posters in the auction are examples from the GWR, LMS and LNER, with the first-named contributing three that are believed to be making their auction debut, promoting Devon, Weston-super-Mare, and the Cornish Riviera. The sale, at Pershore High School, starts at 10am.

Read more News and Features in Issue 239 of HR – on sale now!