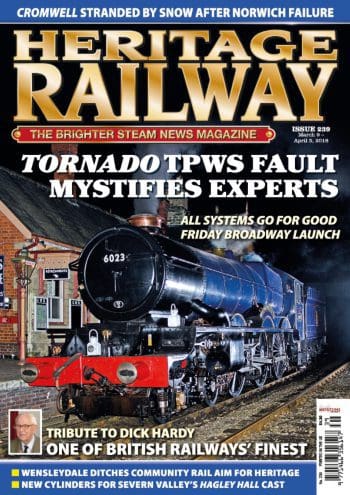 Oliver Cromwell on the Great Eastern by Ken Livermore.

Off the shelf
Latest book and DVD releases.

Up & Running
Guide to railways running in spring 2018.

Digital nights
The advent of digital photography gave many advantages for photographers over what had gone before and continued technical advances are creating new opportunities. John Titlow presents a selection of recent images recorded long after the sun had gone down.

Nipper of the Yard
An early use of narrow gauge steam locomotives was as works shunters. Mark Smithers reports on a new-build project for an LNWR locomotive design which will be the first 18-inch gauge non-miniature steam locomotive completed in the UK since 1927.

The Sumpter Valley Railroad
Heritage lines in the United States come in a variety of shapes and sizes, all with their own individual history. Andrew Rapacz reports on an excellent weekend of steam in Oregon.

Two Pannier Tanks to Brymbo
In the last days of BR steam, there were some surprising workings but in the days before mobile phones and the internet, reliable information could be hard to come by. Robert Anderson reports on one of the last passenger trains to be hauled by a Great Western pannier tank, which also involved an LNER Pacific in North Wales shortly before its withdrawal.

Contents
A wintry scene at Burrs on the East Lancashire Railway as L&Y 0-6-0 No. 52322 passes with a photo charter goods train on February 12. PHIL WATERFIELD

Cover
GWR 4-6-0 No. 6023 King Edward II at Highley on the Severn Valley Railway during clearance trials on February 24. JOHN TITLOW