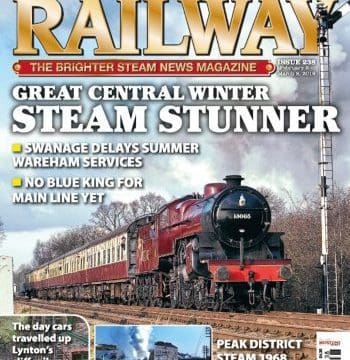 Swanage Railway suspends Wareham services until DMUs are ready; RAIB issues maintenance warnings after toddler falls through hole in a coach toilet floor; Didcot’s blue King may not run on the main line, and the day classic cars rode up the Lynton & Lynmouth Cliff Railway. 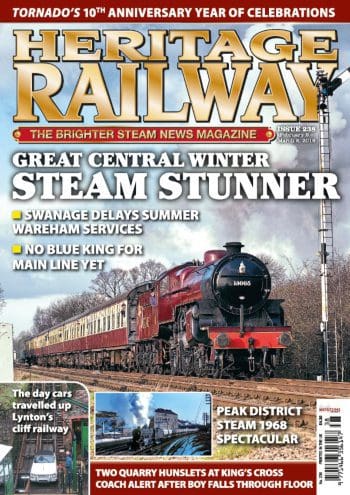 Don Benn reports on steam over Shap and in Kent.

The crimson ‘Crab’ on the Great Central by Brian Sharpe.

Where your views matter most.

Guide to railways running in early 2018.

Steam across the High Peak

Brian Sharpe recounts the story of steam’s return to one of Britain’s most popular tourist areas 50 years after BR retired its last six steam engines in the region.

The Great Central Railway’s January 26-28 winter steam gala proved a resounding success, thanks to the appearance of two guests in ‘Big Four’ colours – B12 No. 8572 in LNER apple green and LMS ‘Crab’No. 13065 in crimson lake, writes Robin Jones.

Many villages have heritage centres, often sited at their long-closed railway stations. Hugh Dougherty visits a village heritage centre that demonstrates how it should be done.

Steaming back to strength

Threatened with closure almost 10 years ago, Gareth Evans finds that the Sittingbourne & Kemsley Light Railway is bouncing back, enhancing its offering with additional attractions and locomotive projects, as well as planning its next 50 years.

Expectations have always been high that major infrastructure work and other repairs and improvements will take place on heritage railways and centres during the winter months. But the popularity of such events as Santa Specials has given less time for the work to take place, as Peter Brown found when beginning this exclusive survey just before Christmas 2017.