THE world’s most famous steam locomotive – Flying Scotsman – will be visiting towns and cities across the UK once again this year, following the announcement of a national tour.

The National Railway Museum (which owns the locomotive) has signed a six-year contract with engineering firm Riley & Son (E) Ltd, whcih will operate and maintain locomotive No. 60103 Flying Scotsman .

The new contract will see 2018 start in style with a tour of venues and scenic railway journeys across the UK.

Jim Lowe, Head of Operations at the National Railway Museum, said: “I would like to congratulate Riley & Son (E) Ltd for their success in winning the contract and I look forward to working with the team again in what is sure to be a very popular 2018 touring schedule. Flying Scotsman is a true symbol of engineering excellence and continues to inspire and amaze crowds of people wherever it goes.

“Flying Scotsman is a fantastic ambassador for the National Railway Museum and we aim to give as many people as possible the chance to see this legend of the steam age.” 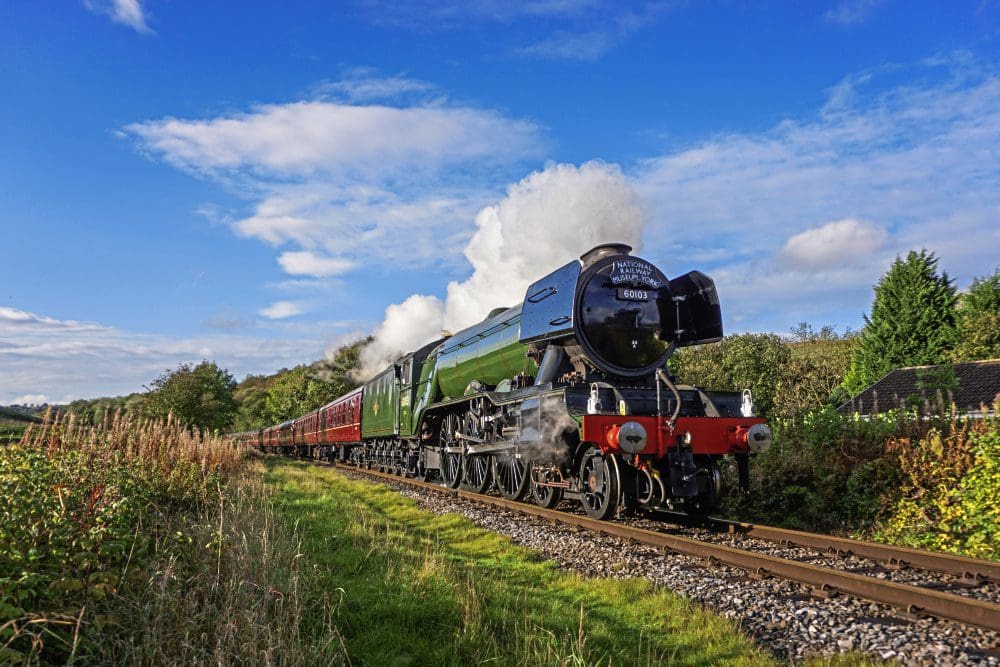 The first opportunity this year for the public to see Flying Scotsman will be March 10 and 11 at the East Lancashire Railway in Rawtenstall, where it will be on static display.

East Lancashire Railway Chairman, Mike Kelly, said: “We are very proud of our relationship with Flying Scotsman . From her debut visit to the ELR back in 1993, to being the first heritage railway to host her following her extensive £4.2million restoration in January 2016, to now where she will make a number of appearances on our line throughout the year, captivating thousands more visitors as the world’s most famous engine. She has a very special place in our hearts and we can’t wait to welcome her back to the North West.”

The record-breaking engine is scheduled to visit the heritage railway line on several other dates in the spring, before embarking on railway tours, taking in locations in Scotland, the Lake District, the Chiltern Hills, the North Downs and the Yorkshire countryside.

As a special thank you for providing valuable assistance with a mechanical problems last year, the locomotive will return to the Nene Valley Railway in Peterborough.

Flying Scotsman will also make an appearance later in the year at the National Railway Museum in York and at Locomotion in Shildon.

The current schedule, including details of how to book tickets through tour operators Steam Dreams and the Railway Touring Company, is available on the dedicated Flying Scotsman website: http://www.flyingscotsman.org.uk/events/scotsman-on-the-tracks/.

Further dates will be added to the website throughout the year, once details are confirmed.

The contract was awarded to specialist engineering firm Riley & Son (E) Ltd, following a competitive tender process. Based in Heywood, Lancashire, the firm is the current operator of Flying Scotsman and was responsible for restoring the locomotive back to working order – completed in 2016.

Ian Riley, from Riley & Son (E) Ltd, said: “I am very pleased that we have been appointed to maintain and operate Flying Scotsman for the next six years, which will enable us to develop a long-term plan for the care and management of this world-renowned engine.

“The success is down to the skills, experience and hard work of the whole team who have spent many hours working on the locomotive from restoration to the present day. Flying Scotsman is definitely a special engine and the chance to work with such a well-loved locomotive again is a real privilege.”

As well as day-to-day operation and maintenance, the contract will include a comprehensive overhaul in 2022 and there are plans to mark the engine’s centenary celebrations in 2023.

The 2018 Flying Scotsman tour follows last year’s successful programme which saw the engine complete mainline excursions across England, Wales and Scotland. The engine was also the VIP guest at several of England’s best-loved heritage railways, including the Keighley & Worth Valley Railway, the Bluebell Railway and the West Somerset Railway.

Flying Scotsman finished its operational tour in November 2017 and has been undergoing scheduled maintenance over the winter.

Marcus Robertson, founder of Steam Dreams, said: “To start our Flying Scotsman season with the iconic trip to Edinburgh is always magical, but then finishing with the loco on the first leg of a Holiday in The Lakes will be the icing on the cake. It is hard to describe the emotions this amazing loco seems to evoke, but we anticipate a very popular public response once again.”

Nigel Dobbing, managing director of The Railway Touring Company, said: “We are delighted to have again secured the services of Flying Scotsman to haul some of our tours this year, including the first leg of our Great Britain XI tour. This iconic steam locomotive is always a very popular addition to our programme of daytrips within the UK.”