There have been many books written by enthusiasts detailing their travels in pursuit of BR steam traction over its final few years in the 1960s.

The author of this sizeable and well-illustrated volume was resident in the West Midlands and relatively well placed to witness the last days of steam in all parts of the country.

With this second volume starting in the summer of 1966, large parts of the country were already steamless but there were still the last of the A4s to see in Scotland and even a few GWR pannier tanks working in the West Midlands. 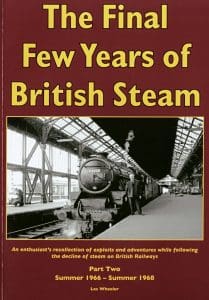 Gradually the diesels took over though. The summer of 1967 saw the end of steam on the Southern, quickly followed by the North-East and then the West Riding. From the end of 1967, steam was concentrated exclusively in the north-west and the pace hots up. Coverage of the last steam workings in the first half of 1968 is extremely detailed.

Much of the travelling was by train and there were many shed visits. An appendix even lists every steam engine seen on every shed visited between 1959 and 1968. Many readers will be familiar with the subject matter and have their own fond memories of these now far-off days, memories which will undoubtedly be rekindled by this book.

Proceeds from the sale of the book will go towards the upkeep of LMS ‘Black Five’ 4-6-0
No. 45212, the last steam engine to carry out a normal duty for British Railways.