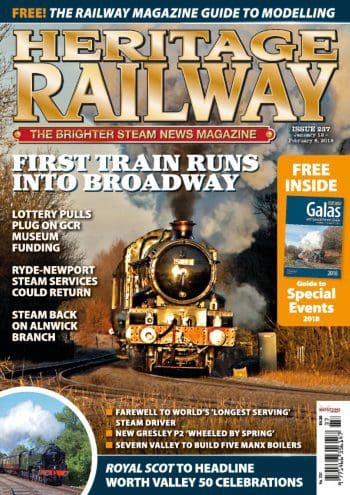 With Full Regulator
Don Benn reports on steam around the Welsh borders past and present.

Up & Running
Guide to railways running in early 2018.

Events Guide
The definitive list of all heritage line
enthusiasts’ events in 2018.

Next stop Chilcompton!
It is said that good things come in small packages, and as Stephen Roberts outlines, this could easily apply to the heritage railway at Midsomer Norton, the only place where standard gauge steam rides are available over Somerset & Dorset Joint Railway track.

China Railway Museum
With steam surviving into the 21st century, China was perhaps slow in making efforts to preserve its earlier railway heritage, but Paul Stratford reports from Beijing on the country’s impressive railway museum.

Next issue of HR on sale February 9 – order your copy now!