Railwayana collector and Heritage Railway reader Richard Wadeson has a 62-year-old Ian Allan ABC Combined Volume in his book collection which he would love to return to its original owner, trainspotter Master I Ritchie… if he could only find him.

Richard, a railway enthusiast since the mid-1950s, was given a copy of a winter 1955/56 Combined Volume in about 1961, and has cherished it ever since even though its original owner underlined all the locos he had ‘copped’ in true trainspotter tradition. 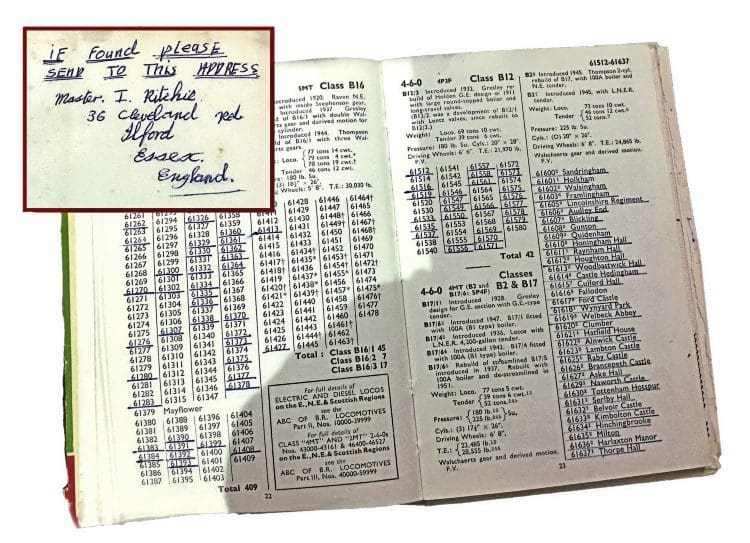 Now aged 72, Richard, who lives in the Essex village of Blackmore End, has decided to downsize his extensive collection of railway books, and one of these is the Combined Volume which on its flyleaf has the first owner’s name and address: Master I Ritchie, 36 Cleveland Road, Ilford, Essex, England (I love the England bit).

Not surprisingly, most of the underlinings are of Eastern Region engines, especially those that ran on the former Great Eastern line, and living where he did – just the other side of the tracks to my then-Ilford home – he was doubtless a regular at Stratford (30A) shed and works.

Master Ritchie, however, may have travelled far further afield, for the list of B1s includes several underlined North Eastern and Scottish regions-based members of the class, and he saw a couple of NE Region B16s too.

“It would be great to reunite this volume with the original owner,” said Richard.

Read more New and Features in Issue 236 of HR – on sale now!