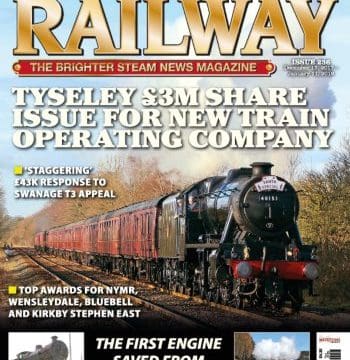 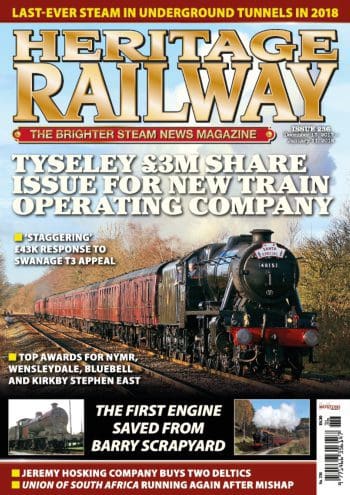 Two Deltics bought by Jeremy Hosking’s company; A4 Union of South Africa back in action after mishap; Northern Belle sold; late-night repair for Flying Scotsman and newly-red Duchess of Sutherland to run mainly in the south.

Centre
Jubilee No. 45699 Galatea on a rare visit to Halifax by Dave Rodgers.

Up & Running
Guide to railways running in the festive season and early 2018.

Fifty years ago, the last Britannia Pacifics were concentrated at Carlisle Kingmoor, due for closure on December 31, 1967. Once the pride of Norwich and elsewhere, the Britannias were now filthy, had been stripped of nameplate and numberplates, but were still doing a day’s work. Maurice Burns recalls the Britannias at work over the Northern Fells and the efforts of enthusiasts to see them go out with some pride as their days came to an end.

The Railway Preservation Society of Ireland has been in business a long time. Hugh Dougherty visits its railway museum on the Antrim coast which has been more than 50 years in the making.

TV dramas are not always noted for their historical accuracy, but one children’s series in the 1980s was very different in this respect. Avril Rowlands who wrote the stories, recounts the efforts made to achieve authenticity while filming on the Severn Valley Railway.

Alexander Macdonald: From scrap to Swallows and Amazons. The 43924 story

It is nearly 50 years since the first steam locomotive was rescued from Barry scrapyard for preservation. Fiona Kennaugh tells the story of how her father was instrumental in saving this locomotive which was to open the door for a further 212 steam engines to leave the famous yard.

The next issue of HR is on sale on January 12 – order your copy now!