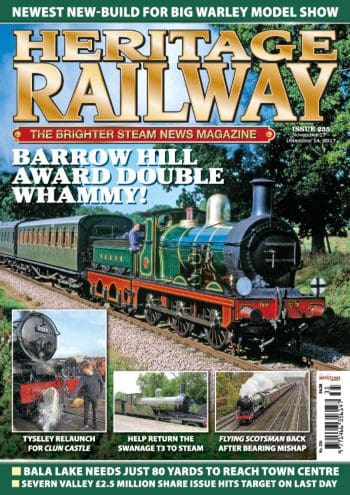 Up & Running
Guide to railways running in November and the festive season.

Steam over the fells farewell
As the clock ticked down to the end of BR steam, it was now concentrated in the North West. The northern outpost of this was Carlisle Kingmoor which still supplied steam to work over Shap summit. Maurice Burns reflects on his early adventures to Shap and the countdown to the closure of Carlisle Kingmoor, Workington and Tebay sheds and the end of steam over the fells on December 31, 1967.

Going behind the scenes
Most visitors to heritage lines see only their train, the buffet, shop and toilets, but there is far more to see on an organised tour behind the scenes. Peter Brown enjoyed such an experience on the Kent & East Sussex Railway.

A Lincolnshire phoenix
It seems inconceivable that a steam-worked narrow gauge railway would be built in the 1960s to fulfil a real passenger transport need, but as Mark Smithers reports, its new incarnation is more orientated towards preservation.

The next issue of HR is on sale December 14 – order your copy now!