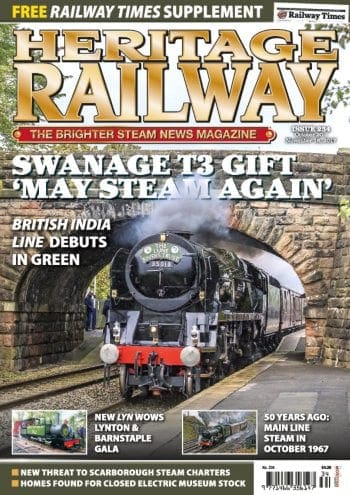 Centre
Leander on the Cumbrian Coast by David Price

Up & Running
Guide to railways running in the autumn.

Contents: LMS Princess Coronation Pacific No. 46233 Duchess of Sutherland heads empty stock from York to Scarborough past Kirkham Abbey for Steam Dreams’ ‘Moors & Dales Explorer’ which it will later take to London, on September 18. CHRIS GEE

The autumn of 1967 saw the end of steam on the Eastern Region and at the great railway centre of Crewe. BR also introduced a ban on privately-owned steam engines. Brian Sharpe recounts not only how BR’s steam operations rapidly contracted as the final curtain approached but also how many now-famous locomotives were being saved.

The world has been in mourning for East Somerset Railway founder David Shepherd, who died aged 86 on September 19. After becoming an international wildlife artist and later a leading conservationist, he also bought two steam ‘beasts’ from British Rail in 1967 and helped transform our rail landscape, writes Robin Jones.

Commemorations marking the 50th anniversary of the end of steam on the Southern Region continue to capture the public imagination big time – with the Great Central Railway seeing a 33% increase in visitor numbers for its autumn steam gala, writes Robin Jones.

Early October saw half of the preserved production Deltic fleet drawing the crowds at the Bluebell Railway, which for so long was a no-go area for diesels, writes Robin Jones.

The shining light at the end of the Central Line…

It could be reasoned that the original Great Eastern Railway, and latterly the London Transport line linking Epping to Ongar that closed in 1994, would not have that many railway skeletons in its closet. Heritage Railway troubadour writer, photographer and regular at the present day Epping and Ongar Railway, Geoff Silcock, disagrees.