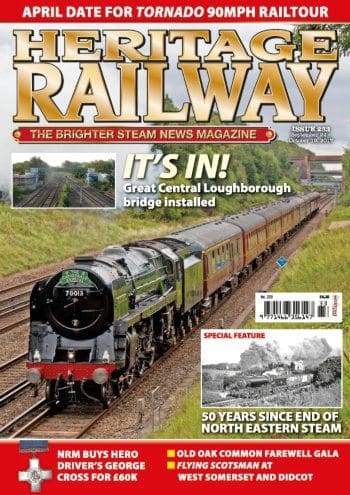 With Full Regulator
Don Benn reports on the performances of Clan Line
on the ‘Torbay Express’.

Centre
Tornado from the air in Norfolk by Mike Page.

Up & Running
Guide to railways running in the autumn.

North Eastern Steam Farewell
The final 18 months leading to the end of BR steam operation in the North East saw many last steam workings. Maurice Burns recalls his memories of that time and the efforts of many other enthusiasts to clean up some of the worn out old engines to see steam go out in style.

Still growling on: Modern traction preservation
There is no doubt that diesels are an integral part of railway preservation but this was not always the case. Brian Sharpe delves into the increasingly complex world of British main line diesel preservation.

Didcot’s LNER double act!
Flying Scotsman’s first appearance at Didcot Railway Centre since 2005 and a guest appearance by another Gresley masterpiece, A4 No. 60009 Union of South Africa, brought in 6000 visitors over the August bank holiday weekend, writes Robin Jones.

The last day of North Blyth steam
Fifty years ago, steam was in retreat and North East England witnessed the end of the steam era on Saturday September 9, 1967. One of the sheds closed to steam on that day was North Blyth. Trevor Gregg describes the history of the depot and recalls the very last steam working.

Old Oak Common: The superb grand finale
A legendary name amongst railway historians and enthusiasts, Old Oak Common shed signed off with its last-ever open day on September 2, when locomotives and traction units past, present and future came together to pay tribute to 111 proud years of history, in a showpiece event organised by the modern-day Great Western Railway, writes Robin Jones.