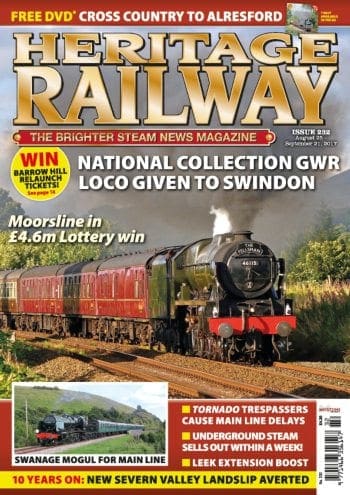 With Full Regulator
Don Benn reports on Duchess of Sutherland’s run from Tyseley to Minehead.

Up & Running
Guide to railways running in September.

Golden Jubilee
50 years ago, the last regular expresses to be hauled by pre-Nationalisation express steam engines came to an end on the Settle & Carlisle line. It was to be 13 years before the line saw the return of an LMS Jubilee but 50 years on from the withdrawal of the last three of the class, this has once again become commonplace. Brian Sharpe examines the long and ongoing relationship between Stanier’s express 4-6-0s and England’s most scenic main line railway.

Warwickshire: an important Manning Wardle survivor
Industrial steam locomotives played an important role in the early days of even our largest heritage lines. Mark Smithers reports on the interesting history and heavy overhaul of a saddle tank which has spent 50 years on the Severn Valley Railway.

Steaming to Bundoran: 60 years ago this summer
The railways on the west coast of Ireland were decimated long before those on the mainland. Hugh Dougherty revisited Bundoran Junction, and recalls a journey on the Great Northern Railway of Ireland just before it closed.

Contents
LMS 4-6-0 No. 46115 Scots Guardsman departs from Frodsham and crosses the River Weaver with the Railway Touring Company’s ‘Welsh Mountaineer’ returning from Blaenau Ffestiniog to Preston on July 25. KARL HEATH