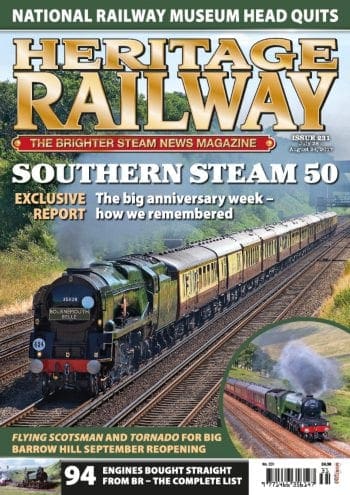 Centre
Clan Line on the ‘Bournemouth Belle’ at Vauxhall by Mick Alderman.

Up & Running
Guide to railways running in August.

50 years after the end
It is now half a century since Britain’s last steam main line went over to electric traction overnight. Brian Sharpe gives a summary of how this historically significant anniversary was marked.

94 of the best
50 years ago there was only one standard gauge preserved railway running timetabled steam services and time was running out to save any more main line steam engines for posterity. Brian Sharpe pays tribute to the steam engines purchased from BR during the 1960s to carry on steaming in the first wave of heritage railways to be opened.

All aboard the Jumbo Express
The Whipsnade Zoo railway leads a quiet existence and is rarely reported on. Peter Brown visited the railway in July for an update.