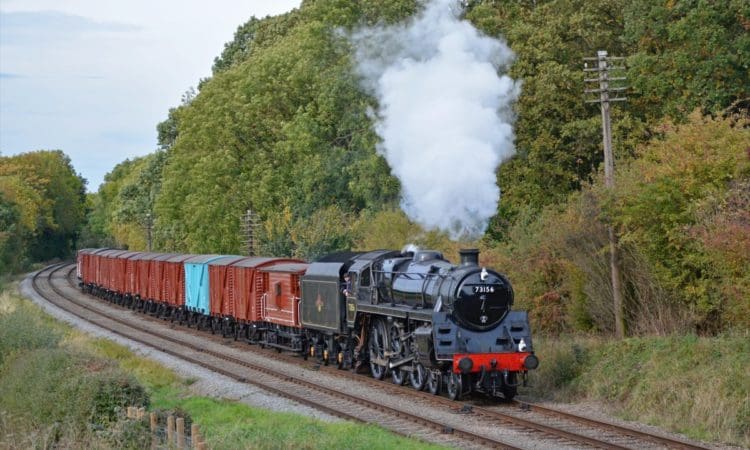 The North Yorkshire Moors Railway has announced the latest visiting locomotives which will be visiting the Annual Steam Gala, taking place from September 22-25.

BR Standard 5 No. 73156, which will be attending courtesy of the Great Central Railway in Loughborough, is only one of five surviving Standard Class 5 locomotives from the 172 originally built by British Railways Workshops between 1951 and 1956. It returned to service for the first time since withdrawal from British Railways in October 2017.

Also joining is No. 85 Taff Vale Railway Class 02, courtesy of the Keighley and Worth Valley Railway in Howarth, which was one of the locomotives that worked at the Lambton, Hetton & Joicey Colliery. During the gala the locomotive will team up with the NYMR’s No. 29, ‘Peggy’, which also worked at the colliery.

No. 73156 and No. 85 join LNER A4 ‘Sir Nigel Gresley’ No. 60007, which will also feature in the event in its temporary semi-matt black livery. Visitors will be able to view these iconic guest engines alongside the NYMR’s home fleet, charting over 100 years of locomotive history.  The Steam Gala is a great opportunity to see NYMR’s demonstration freight trains that once moved vast quantities of materials around Britain by rail; now lovingly restored by the NYMR’s Volunteer Wagon Group.

At the NYMR Annual Steam Gala, visitors will experience a host of exciting events and activities, including a beer festival, trade stalls, demonstrations and working displays, and the chance to visit the engine shed at Grosmont.

Discounted four-day Steam Gala tickets are available for £126, with two-day and three-day options also available. Adult single day tickets are priced at £45. For further information on the locomotives taking part in the gala and to purchase tickets, visit nymr.co.uk/steam-gala