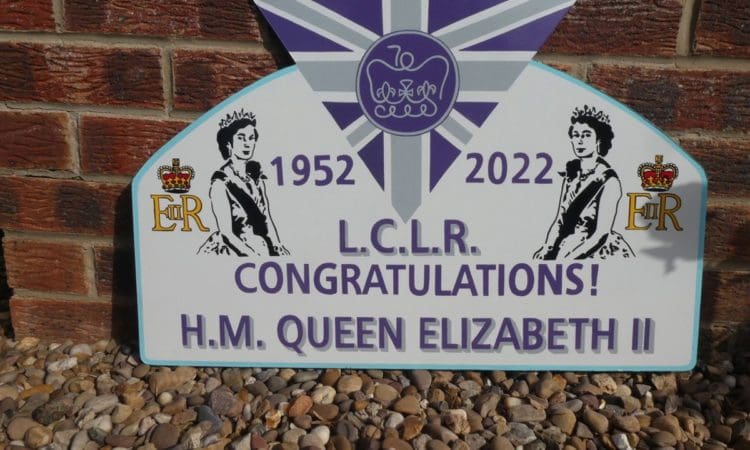 Heritage trains will celebrate the The Queen’s Platinum Jubilee on two days of the forthcoming Bank Holiday on the Lincolnshire Coast Light Railway.

On Thursday, June 2, one of the line’s heritage diesel locomotives will operate services and the 1903-vintage steam locomotive Jurassic will pull trains for most of Saturday, June 4’s operations.

The trains will carry special commemorative Jubilee headboards made and painted by traditional signwriter Tim Fry at his workshop in Martin Dales, close to the site of the former Woodhall Junction railway station. It’s hoped the LCLR’s Walls Lane station and surroundings will be decorated with bunting. Fares will be kept to last year’s levels: £2 return or £5 for a family of up to two adults  and three children – under- 3s and dogs travel free.

The Lincolnshire Coast Light Railway was the first heritage railway in the world to be built by enthusiasts on a greenfield site when it opened in August 1960 as real public transport, linking the bus terminus in North Sea Lane, Humberston (south of Cleethorpes) to the nearby beach and the The Fitties holiday camp. Upon closure in 1985, it went into store and was rebuilt in the Skegness Water Leisure Park in Walls Lane, Ingoldmells, reopening there in 2009.

When The Queen acceded to the throne, the line’s rolling stock was still in use serving industry and agriculture – in quarries, farms, brickworks and contractors – or even as sports pavilions! Since then, most of it has been painstakingly restored by the line’s volunteer workforce, winning several awards along the way.

Richard Shepherd, chairman of the LCLR’s Historic Vehicles Trust, said: “We are delighted that the railway can be part of the celebrations to mark the Platinum Jubilee. We were honoured by a visit from The Princess Royal in 2017, for whom we operated a Royal Train.

“We hope as many people as possible will join us when we run our jJubilee trains during the summer – when it will be possible to ride in what is now our ‘Royal Carriage’, originally built for the Ashover Light Railway, Derbyshire, nearly a century ago.”