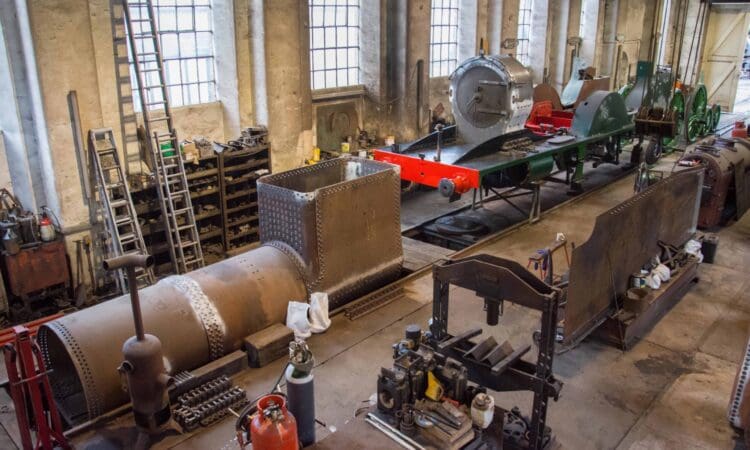 A £25,000 appeal has been launched to help fund the restoration of the tender belonging to a unique Victorian T3 class locomotive to assist its return to steam.

The work would see the locomotive return to steam for the first time since 1948 when the engine escaped being scrapped so it could celebrate the centenary of London’s Waterloo station.

After the 1893-built London and South Western Railway locomotive No. 563 was gifted to the Swanage Railway Trust by the National Railway Museum in 2017.

Costing £50,000, the restoration of the locomotive’s tender – which stores 3,300 gallons of water and three tonnes of coal for the engine – will be taking place in the Swanage Railway’s Herston engineering works, on the outskirts of Swanage.

It is hoped to have the 81-tonne locomotive back in steam and hauling trains, for the first time in more than 70 years, in 2023 for the centenary of the Southern Railway and the 185th anniversary of the formation of the London and South Western Railway.

The Swanage Railway Trust’s  563 Locomotive Group chairman Nathan Au said: “The last time that No. 563 steamed and hauled a train was in 1948 so for more than 70 years many thought they would never see a unique T3 locomotive work again.

“We are working hard to ensure the engine’s preservation for future generations to enjoy and the best way to do that is by seeing No. 563 brought back to life.

“With an incredibly rich history to tell – given its Victorian heritage – the T3 is unique because it is the only surviving tender engine designed by renowned locomotive engineer William Adams.

“The only steam locomotive owned by the Swanage Railway Trust, a working T3 gives us the opportunity to show our visitors what the railway was like during the industrial and social development in Dorset at the end of the 19th century.

“No. 563 is a direct link to the Swanage Railway’s past – right back to the early days of the London and South Western Railway when holiday makers first visited Purbeck by train,” added Nathan who is a volunteer steam locomotive driver on the heritage line.

The Swanage Railway Trust’s fund-raising chairman Randy Coldham explained: “All the fund-raising work has been managed by the 563 Group itself, on which it must be congratulated, with the Group continuing to ensure that the T3 returns to steam.

“The Swanage Railway Trust is initiating this winter appeal to raise £25,000 towards the cost of the restoration of the T3 tender at our Herston engineering works.

“As always, we’d like to thank our supporters for their generous standing orders and donations that have helped us achieve a significant number of milestones on the railway in a relatively short amount of time.

“While the work on the tender at Herston is of importance, so is the continued and expert work on the restoration and overhaul of the locomotive at the Flour Mill engineering works in Gloucestershire.

“If their continued support – as well as interest and contributions from new supporters –continues then the T3 could be back in steam and hauling a train during 2023 which is very exciting,” added Randy who is a volunteer signalman on the Swanage Railway.

Built in February, 1893, for hauling express trains on the London and South Western Railway, T3 class 4-4-0 wheel arrangement locomotive No. 563 was withdrawn by the Southern Railway at the end of the Second World War in August, 1945, by which time it had run a total of 1.5 million miles.

Designed by William Adams for smooth running at up to 80mph – and built at Nine Elms in London – No. 563 was saved from being scrapped in 1948 when it was selected for restoration and display at the centenary celebrations for London’s Waterloo station.

That decision guaranteed No. 563’s preservation with the unique and last of its class steam locomotive becoming part of the National Railway Museum’s collection.

Donations towards the restoration of the T3 tender can be made by visiting the Swanage Railway Trust website at swanagerailwaytrust.org/appeal.