The ownership of a unique Victorian steam locomotive that escaped the cutting torch thanks to the centenary of London’s Waterloo station – and starred in a theatrical production of The Railway Children on both sides of the Atlantic – has been transferred to the Swanage Railway by the National Railway Museum. 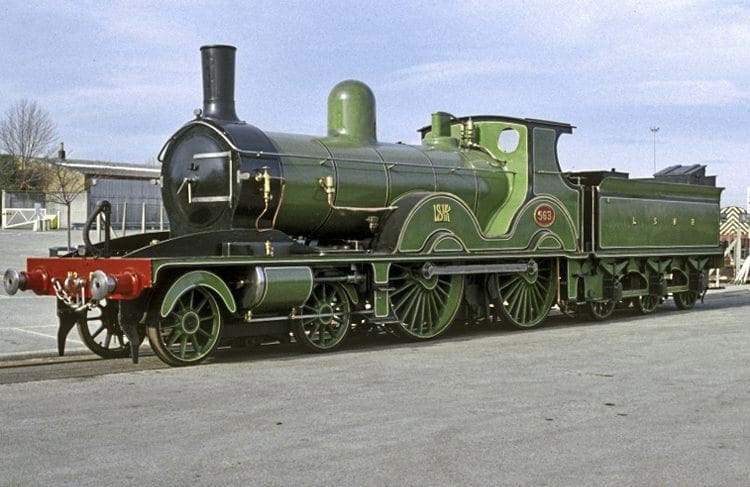 T3 class 4-4-0 wheel arrangement locomotive No. 563 was built in February 1893 for hauling express trains on the London and South Western Railway. It was withdrawn by the Southern Railway at the end of the Second World War – in August 1945 – by which time it had run a total of 1.5 million miles.

The 81-tonne No. 563 was designed by William Adams for smooth running at up to 80mph. It was built at Nine Elms in London and was not scrapped in 1948. Instead, the unique locomotive was selected for restoration and display at the centenary celebrations for London’s Waterloo station in a move that thankfully guaranteed the preservation of No. 563.

The veteran locomotive became part of the National Railway Museum collection at Locomotion, Shildon, in County Durham,  and was transported by sea to Canada in 2011, where it had a six-month starring role in Toronto’s Roundhouse Park of The Railway Children.

No. 563 returned across the Atlantic and again took to the stage when the production – an adaptation by Mike Kenny of E. Nesbit’s much-loved novel – was staged at King’s Cross station in London, where a thousand-seat pop-up theatre had been built.

Swanage Railway Company chairman Trevor Parsons said: “We are delighted, thrilled and very grateful to the National Railway Museum for donating such a rare Victorian steam locomotive to the Swanage Railway.

“Thanks to the T3’s ownership being transferred to the Swanage Railway, we hope to suitably display the locomotive to the public and illustrate a period of important London and South Western Railway history that has previously not been possible. Our primary aim is No. 563’s conservation and preservation.

“The T3 class of steam locomotives – and perhaps No. 563 itself – worked trains from London down to Corfe Castle and Swanage, taking excited families on holiday from the city to the sea. The locomotives were part of the story of Swanage’s development as a popular seaside resort.”

he added: “We look forward to hopefully putting the locomotive on suitable display so our visitors can delight in its late-Victorian engineering and see the marvellous machine that hauled trains from the city to the sea for half a century.

“Only 20 of the T3 class of steam locomotive were built for the London and South Western Railway in 1892 and 1893 – and No. 563 is the only survivor of the class, so it is unique,” added Mr Parsons, a Swanage Railway volunteer signalman and train guard.

A spokesman from the National Railway Museum said: “We are delighted to gift the T3 class to the Swanage Railway as part of its growing collection and to have found such a suitable home for this locomotive.

“The Swanage Railway has an outstanding record for preserving and displaying items, something which is paramount to the museum, allowing the public to appreciate the locomotive and attract a new audience to Swanage on a railway steeped in T3 history.”

The first T3 carried three tonnes of coal and 3,300 gallons of water and was withdrawn from service by the Southern Railway in 1930 as the late-Victorian locomotives were replaced by more modern designs.

Just three years later, only three of the outside cylinder locomotives remained in use for light duties.

The transport demands of the Second World War delayed the end for No. 563, but the coming of peace saw the last of the Victorian class withdrawn.

During 1948, No. 563 was restored in the London and South Western Railway Dugald Drummond locomotive livery of green with chocolate edging.

In 1961, the T3 was repainted in its original 1893 livery of light green with black and brass beading.

The T3 is due to be transported by road to the Swanage Railway in the near future.