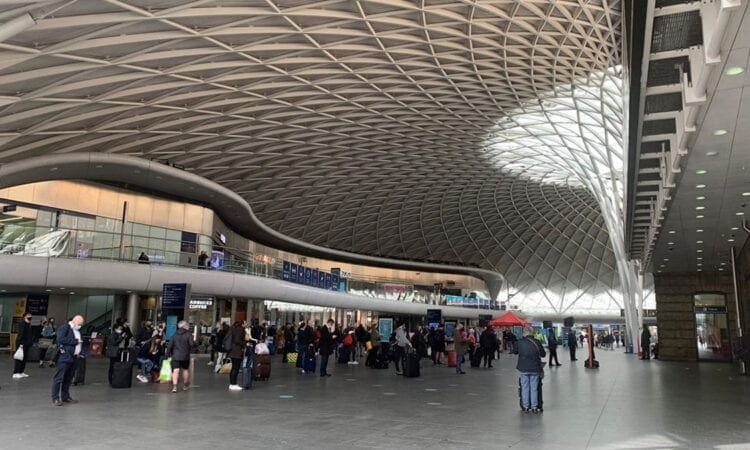 More railway lines must be electrified if the UK is to meet its targets to cut carbon emissions, according to the rail industry.

Fifteen industry, business and campaign groups have written to Transport Secretary Grant Shapps urging him to launch a “no regret” scheme of electrification work. The letter stated that claims about the cost of electrification focused on “a few past projects”.

Stonehaven investigation to focus on lack of drainage inspections

An investigation into the Stonehaven rail crash is focusing on the “lack of an effective drainage inspection regime”.

The Rail Accident Investigation Branch (RAIB) said there is “no evidence” a drainage system involved in the fatal accident in Aberdeenshire had been fully inspected since its construction in 2012. Read the full interim report.

Passengers are being urged not to travel to or from London King’s Cross over the weekend of April 23-25 as major upgrades are made to the signalling system.

There will be extensive closures across the East Coast route, when there will be no trains via Finsbury Park to or from King’s Cross, St Pancras or Moorgate. Some changes will be put in place.

A rail union is stepping up a campaign warning of huge job cuts in the coming months amid the threat of a national industrial dispute.

The union has launched a social media campaign and sent details to all its Network Rail members, warning they face an open-ended pay freeze and a “wholescale attack” on working conditions.

Network Rail has been fined £696,666 for failing to protect the safety of staff following a fire at Godinton substation which left one worker seriously injured.

The rail body pleaded guilty under the Health and Safety at Work Act, the Office of Road and Rail (ORR) said.

A Network Rail employee was seriously injured with third degree and mixed depth burns in a fire at the substation, after Network Rail failed, over a significant period of time, to prevent water leaking into the building and to maintain dehumidifiers installed inside.

Miniatur Wunderland, a model railway museum in Germany, have been busy in lockdown setting a new Guinness World Record.

The museum set the world record for the ‘Longest melody played by a model train’ when lockdown meant that visitors were not allowed in the exhibitions.

The Hollywood star, 58, was flanked by an entourage as he made his way across the set of Mission Impossible 7.

Hundreds of crew were seen setting up for filming in the village of Levisham on the North York Moors near Pickering, which appeared to involve the use of a modified train and tracks.

Due to staff shortages in our Control Room, there could be disruption to services on the Circle, Hammersmith & City and Metropolitan lines, as well as the District line between High Street Kensington and Edgware Road, and the Piccadilly line between Uxbridge and Rayners Lane. This could also affect Chiltern Railways services at times.

This could mean a reduced service, or no service at other times. Because of this, please plan ahead and check before you travel.

Until further notice, there will be no Night Tube or Night Overground service, and limited Night Bus services.

Please check before you travel and plan your journey ahead of time.

No service between Romford and Upminster
Use local bus routes.

National lockdown: Stay at home. Only use public transport for essential purposes. Avoid travelling at busier times if you can, wear a face covering (unless exempt), open train windows to help with ventilation, stay apart from others and wash or sanitise your hands frequently.

As restrictions ease, we’re increasing some of our services from Monday 12 April. Yellow route services will go back to the normal timetable and evening and Sunday services will increase on the Blue route.