It’s been a marathon, writes Geoff Courtney, with every step being recorded in Heritage Railway. Now, though, it’s over, and Richard and Judi Furness can relax in the glow of an astonishing series of handsome coffee-table books that has raised the profile of railway posters to a new and previously unattained level. 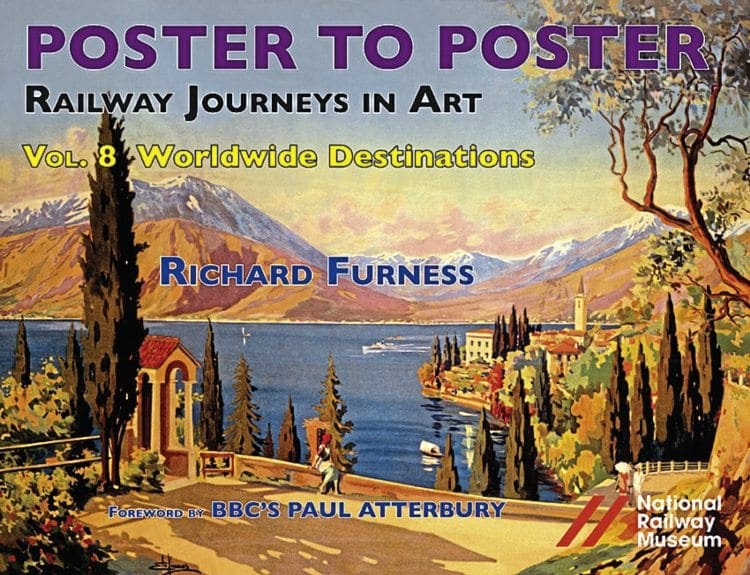 Volume 8 is the last – is that a sigh of relief I can hear from Richard and Judi? – and is at the very least the equal of the previous seven. Vibrant colour and facts leap from every page, as does the enthusiasm Richard feels for the subject. That enthusiasm is infectious, and there can be few railway enthusiasts who have read any of the previous volumes and not warmed to a part of the steam era scene that we trainspotters of the 1950s and early 60s took for granted at best, ignored at worst.

Volume 8 brings the curtain down on the series by casting its net overseas, to southern Ireland, Europe, Canada, the USA and Australia.

There’s a Trans-Australian Railway poster bearing the unlikely image of a camel-riding farmer who could almost be a frontiersman watching a Perth-bound steam train pass by, a brilliant Sante Fe poster promoting Arizona that is reminiscent of a scene straight out of a John Wayne movie, and a Chemin de Fer d’Orléans example that gives Chateau d’Amboise a cathedral-like presence.

As volume 8 winds down it turns to the UK to cover the social support railways have provided since their very earliest days, embracing holidays, hotels and industry. The first subject includes a fascinating series of 1936 Southern Railway posters by Audrey Weber (1891-1982) promoting rambles through the four seasons – a horse-drawn plough illustrates spring, a horse-drawn hay cart summer, an early tractor (with SR 1935 registration plate) on threshing duties in autumn, and a horse rider and dog in snow representing winter.

The section on hotels gives Richard an excuse to include a wonderful LNER poster depicting elegantly-dressed ladies in the restaurant of the Great Eastern Hotel at Liverpool Street, and in industry there is an eye-catching illustration by Norman Wilkinson (1878-1971) dating from 1910 of four tracks arrowing away from the foreground, beneath which the LNWR modestly proclaims: “The best permanent way in the world.” No worries about the Advertising Standards Authority
back then.

So it’s come to an end, after 15 years, half a million words, 2100 pages, more than 3000 images of posters. 20,000 man-hours of research and writing, profiles on nearly 500 poster artists, and two book awards. A monumental achievement that has been acclaimed by BBC Antiques Roadshow expert and railway enthusiast Paul Atterbury as “one of the most ambitious and spectacular set of books in recent publishing history”.

A trawl through websites selling past volumes does, indeed, support Paul’s praise, with copies of volume 6 covering the North West of the UK, which is out of print and now a collector’s piece, being advertised for prices in excess of £1000. Poster to Poster has indeed been a success all round.