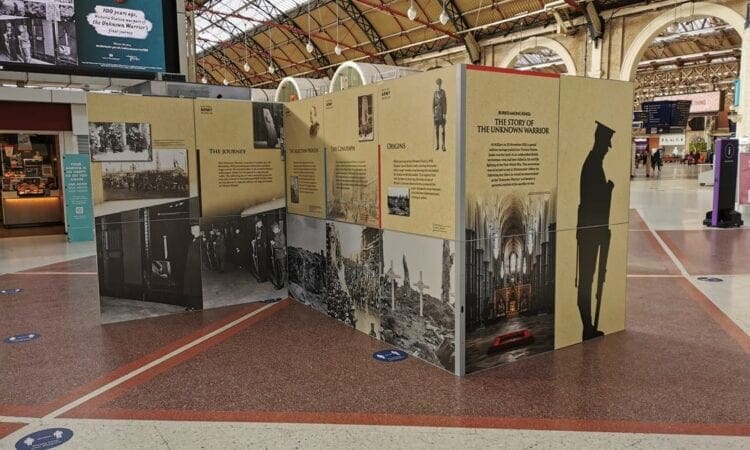 A pop-up exhibition has opened in London Victoria station to commemorate the 100th anniversary of the journey and burial of the Unknown Warrior.

A series of panels created with the National Army Museum in Chelsea explains to passengers the story of the Unknown Warrior, a century after his body was carried through the station on his way from the Western Front to his final resting place at Westminster Abbey.

As substantially fewer passengers are travelling following the latest government guidelines, Network Rail Southern Region will be telling his story through its Twitter feed @networkrailse on November 11.

Anyone who is still travelling can visit the exhibition on the concourse until November 16. Anyone who does so is please asked to respect social distancing and remember “Hands, Face, Space”.

Nicole Cohen-Wray, station director for Network Rail Southern region said: “It’s a great shame that we have not been able to see the crowds which originally accompanied the Unknown Warrior on his original return to Britain but we are honoured to be able to support the National Army Museum in this small way so that passengers passing through Victoria Station may be able to stop briefly to understand the story and memory of the Unknown Soldier.”

Justin Maciejewski DSO MBE, Director at the National Army Museum, said: “Despite current restrictions on travel, we were determined to tell the story of our Unknown Warrior to all those that need to use Victoria Station at this time. We hope that rail travellers are able to pause for a few moments at our poignant exhibition and reflect on this monumental story of national remembrance, thanksgiving and healing as they pass the place where he arrived by train into London.”

“We are pleased that Network Rail are able to host this exhibition to the Unknown Solider at Victoria Station. It’s a shame that the pandemic has meant we’ve had to downscale our commemorations, but we hope people who do absolutely need to travel during this lockdown period are able to see and reflect at this small exhibition.”

Edward Winter, Station Manager for Southeastern at Victoria, said: “We’re pleased to be supporting the recreation of the Unknown Warrior’s journey from Dover to Victoria and that this display will be going up to explain to our passengers about those historic events.

“We ask all passengers on our service travelling through Victoria to continue to respect social distancing guidelines but to take in the exhibition over the coming week.”

Who was the Unknown Warrior?

At 8:32pm on 10 November 1920 a special railway carriage pulled into Victoria Station. Inside was the body of an unidentified British serviceman who had been killed in the terrible fighting of the First World War. This serviceman was to be laid to rest in Westminster Abbey the following day. Here, he would be immortalised as the ‘Unknown Warrior’ and become a powerful symbol of the sacrifice of war.

The burial of the Unknown Warrior was part of a wider culture of commemoration that emerged after the First World War. The focal point for this was the Cenotaph in Whitehall.

The Unknown Warrior’s journey to London on 9-10 November 1920 aroused great excitement and drew huge crowds. He was first taken to an ancient chateau at Boulogne, where he was placed in a special oak coffin. The following day he was conveyed across the channel to Dover in the Destroyer HMS Verdun. Here he was placed in a special railway carriage and taken to Victoria Station with his train arriving at Platform 8.

The pop-up exhibition will be running between the 9th and 17th of November. An extensive exhibition of the story is on display at the National Army Museum until 14 February 2021; please check the website for opening hours and access.