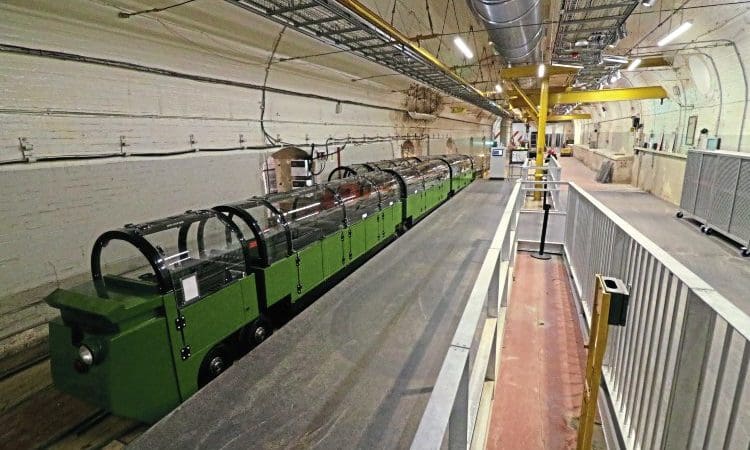 Heritage Railway visited the latest and most unusual tourist attraction to open in the capital.

The Post Office Railway (named Mail Rail in 1987) was a 6½-mile (10.5km) long,  2ft- (610mm) gauge automated electric railway that opened in 1927 to move mail between central London sorting offices and Liverpool Street station (the sorting office at Paddington was next to the mainline station).

It was based loosely on a similar but bigger system in Chicago.

It closed in 2003 when the Royal Mail closed its central London sorting offices and switched increasing amounts of mail from rail to road or air transport.

The Mail Rail museum and trains – part of the new National Postal Museum – opens on September 4, enabling visitors to not only see the old Post Office Railway, but also have a short ride on it, too.

As long ago as 1855, Rowland Hill, then Secretary to the Post Office (and famous for inventing the Penny Post and postage stamps in 1840), suggested the use of underground tubes to move mail using air pressure.

A system linking London sorting offices was considered and a privately built system operated by the Pneumatic Despatch Company, operating nine feet below ground between Euston Station and Eversholt Street, was seen as a model, and trial-use to move mail started on February 20, 1863 and lasted until 1866.  Later, the system was extended to the GPO building in St Martins-le-Grand (near St Paul’s Tube station) via Holborn, opening in December 1873. It wasn’t considered a success and closed after only a few months in October 1874.

The cars ran on rails and were sucked through the tube at speeds of up to 40mph – one of them survives and is in the new Mail Rail museum, having been found by accident by construction workers in 1930 following the Holborn Explosion of 1928 when gas seeped into the old pneumatic tubes and exploded causing widespread damage.

Lesson from America – tunnels under Chicago

A network of narrow gauge (2ft) freight railways in tunnels under the centre of Chicago, built from 1899 initially to carry telephone cables, quickly expanded (in some secrecy – without telling the city authorities) to become a freight-carrying railway conveying everything from coal to food (and briefly mail), and was the inspiration for the Post Office Railway (POR) in London.

The Chicago system eventually expanded to 60 miles of tunnel and had 150 locomotives and more than 3,000 wagons in its heyday. Unlike the new POR the Chicago Tunnel Company system used overhead power and drivers for its locos, which were variations on contemporary mining locos.  The Chicago system was in use until the operator declared bankruptcy in 1956, but most of the tunnels remain in place, although some of the routes were used to build new Subway lines – destroying some of the old tunnels in the process.

Construction of the planned Post Office Railway began in February 1915 with John Mowlem and Co as the lead contractor; the plans had been agreed in 1911 with a fully automatic electric railway planned from the outset – a world first. An Act of Parliament was required – as it was with mainline railways.

Construction was largely manual using shields to protect workers from the danger of tunnel collapses. Tunnels were 2.7 metres (9ft) diameter for the double track main line and 2.1m (7ft) for the single track connecting tunnels; in total 22 miles of tunnel were built.

Most of the main line tunnels are around 21m below the streets, but the stations built in the basements of sorting offices and Liverpool Street station are less deep, around 10m, with steep gradients to the mainline tunnel.

The gradients into stations slow trains down (the 440 V DC traction voltage was reduced to 150 volts to slow trains down, too) and on the way out the downhill gradient sped trains up again. Construction work was suspended during the Great War in 1917, and although the tunnels had been completed, the Treasury would not permit further expenditure to fit out the railway, as materials needed were now scarce.

The tunnels were put to use as safe storage for art from the Tate Gallery and National Portrait Gallery, plus artefacts from The British Museum.

Work restarted after the war and by 1924 track laying had begun.

Operation between Paddington and the West Central sorting office (near Holborn) began in February 1927.

The first mail – initially only parcel post – was carried at Christmas time in 1927 when parcels were moved between Mount Pleasant and Paddington on December 5; other parts of the railway followed in the run up to Christmas. The first letter mail was carried from February 23, 1928 and by March 12 all the stations on the route were open when the station under Western District Office on Wimpole Street opened.

The end-to-end journey time with stops was 24 minutes.

A test train had been operated on an experimental track on Plumstead Marshes in 1914/15, but the main fleet was not ordered until 1923 when work to equip the tunnels got under way.

Kilmarnock Engineering, using English Electric (EE) electrical equipment, supplied the first fleet of trains – 90 two-axle-long wheelbase vehicles in 1927, but these were quickly found to be causing excessive wear on curves, so from 1930 a new fleet of 60 articulated trains was supplied by EE.

Three battery locos, made by EE/ Dick, Kerr in 1925, were used for maintenance; one is preserved in the new museum as is one of the original 1927 trains.

Second World War and the 1950s

Part of the railway was damaged by wartime bombing in 1943, but repairs were undertaken to enable it to continue operation. A new section of line and new station was built in the late-1950s to serve the new Western District office in Rathbone Place (near Tottenham Court Road).

In the late 1970s Royal Mail ordered 34 new articulated trains to largely (but not completely) replace the 1930 type; these followed two EE-built prototypes from the mid-1960s.

The new trains were ordered from Greenwood and Batley (and known as ‘Greenbats’), but most were built by Hunslet between 1980 and 1982 after the original supplier ceased trading. These were the first POR trains to be painted red; later some 1930s’ trains were also repainted and one is on display in the new museum.

Most of the now disused ‘Greenbat’ trains and some older ones are kept in a disused running tunnel at Mount Pleasant – passengers on the new Mail Rail trains can catch a glimpse of them as the route passes over the tunnel. Several Mail Rail vehicles are preserved elsewhere in the UK.

In 1969 The Post Office replaced the old GPO as it became a state-owned company rather than part of the Civil Service. In 1987, following the re-branding of the postal business as Royal Mail Letters, the POR was renamed Mail Rail to mark its 60th anniversary.

In the post-Second World War period the railway’s function changed little, although the type of mail being posted and the services offered by Royal Mail did.

Operationally, the basic principles of how Royal Mail sorted and distributed mail changed little from the line’s opening in the 1920s to the late-1990s; mail was sorted by town and county and distributed, much of it by train. London, and especially Mount Pleasant, was a key part of the national network, with Mail Rail used for several purposes. However, its main purpose was to move
long-distance mail to/from a central London District office or Mount Pleasant.

Mount Pleasant acted as a national sorting centre sending mail to every part of the UK, and it also handled almost all international mail arriving in the country, meaning Mail Rail was a key method of getting it to Paddington and Liverpool Street stations

In the 1990s increasing automation of letter-sorting led Royal Mail to look at new sites for sorting offices, and this led to locations served by Mail Rail being progressively closed.

The decision to sort by postcode area rather than by town and county simplified the transport system. Wheeled containers called ‘Yorks’ (they were trialled in York), carrying trays not bags of letters, were introduced to speed up transport and cut costs; a small cut-down version of the ‘Mini York’ was produced, which was used on Mail Rail, replacing the older wheeled containers.

The new ‘Railnet’ TPO network and new rail-served distribution hub at Willesden (Princess Royal Distribution Centre), which opened on September 30, 1996 was one of the reasons use of Mail Rail declined in the mid ’90s, eliminating any need to take mail to either Liverpool Street or Paddington stations.

Extension of Mail Rail to Willesden was considered in the early 1990s when the new hub was being designed, but the cost of new tunnelling was too great.

Closure and new future as a museum

Royal Mail closed the Mail Rail system on May 31, 2003, with only three of the line’s stations remaining in use.

By 2017 the only mail processing office left open on its route is Mount Pleasant, which remains very busy. While a wide variety of ideas were put forward for possible future use, delivering freight to shops and offices (rather like the Chicago Tunnel Company last century) or a large-scale mushroom farm, none of them happened.

Royal Mail is still responsible for maintaining the tunnels and buildings, employing a small team of engineers to do this.

The new National Postal Museum opened on July 28 at Phoenix Place, between King’s Cross and Farringdon, near to Mount Pleasant mail sorting centre.

The new postal museum has two buildings – one on either side of the road. One tells the story of 500 years of postal services, the other is the former Mail Rail workshop and tunnels underneath the sorting office. It houses a museum with examples of all the rolling stock used on the railway, and for the first time now offers passenger train rides on a 1km loop of the old Mail Rail system using new purpose-built trains.

The Postal Museum has cost around £26million, largely funded by donations from the National Lottery and corporate sponsors, including Royal Mail.

The new Mail Rail line has cost around £900,000, including the purchase of two passenger trains and installation of a multi-media communications system used during the ride.

A new escape route and fire-fighting lift were installed at the platforms using an existing lift shaft should the railway need to be evacuated in the event of a fire or accident.

A new ventilation system has been installed to ensure the tunnels have fresh air.

At least one conventional mining loco was used temporarily in 2016 by contractors, who were preparing the Mail Rail ride ready for service.

The Postal Museum plans to run trains every seven minutes at weekends, with the entire ride taking around 20 minutes. Unlike the original automatic trains the new ones are operated by using joy-stick controls.

Drivers have been recruited from a variety of backgrounds – one is 74 years old and started his working life as an engineering apprentice with The Post Office on the railway in the 1960s.

Access to The Railway Magazine digital archive online, on your computer, tablet, and smartphone. The archive is now complete – with 123 years of back issues available, that’s 140,000 pages of your favourite rail news magazine.

The archive is available to subscribers of The Railway Magazine, and can be purchased as an add-on for just £24 per year. Existing subscribers should click the Add Archive button above, or call 01507 529529 – you will need your subscription details to hand. Follow @railwayarchive on Twitter.